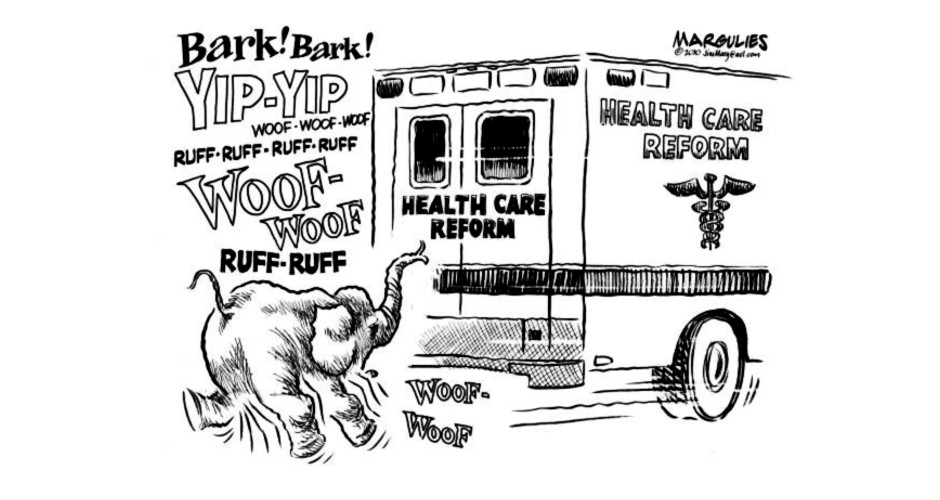 Solving our healthcare problem is not going to happen in one fell swoop as the problem did not just start with Obamacare; it has been festering a long time and part of the problem is thinking that everyone is entitled to have healthcare. We just proved with Obamacare that this will eventually bankrupt the country. Everyone thinks that free market interstate insurance will solve the problem. Think for a moment about why most of the credit card companies are located in three states. It’s because they can charge pretty much whatever interest rates they want because those states have no caps on usury laws. Now everyone can get a credit card but those with poor credit will pay more and have lower credit limits.

Credit cards are not the same as health insurance but they are similar in some ways. Instead of usury limits on credit cards, insurance companies face state-mandated benefits raising their costs and therefore premiums. So if insurers sell coverage across state lines people can bypass mandates and go where insurers suit their needs. This sounds great but insurers will likely do the same as the banks and set up in the states that let them do what they want and that is to insure just healthy people. The result will be the same as Obamacare with separated risk pools, young healthy people will buy stripped down insurance where it’s allowed and the sicker people will go to the few states willing to cover them if there are any.

Five states have already opened their borders to insurers but no one is rushing to open up shop in those states, so erasing state lines may not be the solution. Politicians say everyone should have access to healthcare but access to healthcare is not the same as access to actual care. Look at the high deductibles created by Obamacare. We have median income in the U.S. of $56,000 and deductibles of $5,000 which means people are insured but can’t afford to use their insurance so I doubt that crossing state lines will be the answer.

Changing the system by bringing in integrative medicine and using doctors outside the current traditional system like naturopaths, chiropractors, and acupuncturists to work with conventional medicine physicians would be a good start. By combining the best and scientifically supported therapies of both systems we could deliver quality healthy more efficiently and effectively and at a lower cost. By offering more alternatives for patients and holding doctors and hospitals responsible for result oriented outcomes we might actually see better results and lower costs.

These things might help but the larger problem will be Medicaid because the States can’t afford to continue without Federal assistance. Idaho alone with Medicaid expansion would have 20% of its population on Medicaid rolls. Next year we would receive 3.3 billion from the feds if that went away we would have to raise taxes substantially on everyone to pay for these medical services. There is no easy fix and we are going to see many revisions to our system before we find something that might actually work.

The real solution to the problem is to stop subsidizing medical treatment and get people to understand that they are ultimately responsible for keeping themselves healthy. When employers started offering medical insurance coverage as a benefit it lowered the value of being healthy. Why? Because if you got sick there was medical insurance to pay for it. Before it would come out of your own pocket. When you pay for something yourself it is more valuable than when it is subsidized or paid for by someone else. We have become victims of our elected official’s generosity using our taxpayer money because they thought it was the charitable thing to do. The problem is once you give something away it loses value and this is the three billion dollar problem we have gotten ourselves into in Idaho.

So what is the solution? We could start with education by teaching those on Medicaid about the importance of proper nutrition, exercise, stress management, and sleep. These are the four pillars of health. You can’t just educate them you have to push them into changing their lifestyles so we have a healthier population base. Changing what people can buy with food stamps would be a start, allowing them to purchase only healthy food products. Currently, we give citizens food stamps with no restrictions and they can pretty much buy whatever want even if it will harm them physically in the long run. It’s kind of like giving them a loaded gun to shoot themselves with.

How about giving the people on Medicaid a free gym membership but require them to attend and keep track so they exercise regularly if they are going to get subsidized healthcare from the state. Currently, there are no requirements, we just give them a Medicaid card to use any time they want to go to the doctor. We’re not helping people by paying for their medical bills with our tax dollars. What we are doing is encouraging them to continue to pursue unhealthy habits like smoking, drinking and eating processed foods that make them obese. It’s estimated that twenty-seven percent of Americans are obese, that’s seventy-two million people. According to a study by the Mailman School of Public Health Columbia University, severe obesity costs Medicaid $8 billion annually and is rising. With 1 in 7 adults severely obese, overall medical costs reached an estimated 69 billion for obesity-related health issues. This is no longer a problem it is a fat epidemic.

Healthcare needs to become a personal issue which can only happen through education—which should start in grammar school. If someone wants to get on the Medicaid rolls they should have to go through an educational program on how to get healthy and stay healthy instead of just enrolling every Tom, Dick, and Harry because they are in a certain income bracket. It’s a lot cheaper to keep a person healthy than to pay for them when they get sick.